I made my first website as a homepage on the site of my then ISP sometime in the 1990s (I really don't remember, but the earliest capture of it in the Internet Archive is December 1998). Since 2004, I've been with a proper hosting company and using the domain name markhodson.nl.

This particular embodiment of the site (if I decide to stick with it for a while) is running on Joomla. But frequent visitors will have noticed that the look and structure of the site tends to change radically every few years when the urge to edit seizes me. Normally these changes correspond to bursts of enthusiasm for web design, which don’t last.

This is what it looked like in 2004, when it was still straightforward html and css:

The most recent version of the site was based on Patrick Michaud’s wiki engine PmWiki, suitably modified to run a personal site.

This evolved into a more subtle design using a skin that was a port of a skin with a similar colour scheme I also used on a WordPress site called weblogs.markhodson.nl.

But skins here have tended  to change quite frequently as I tinker with the site — that’s the danger of separating content and design. The Rail3dWiki (now on Rail3D.net), was also hosted on my site for some years using a more traditional implementation of PmWiki as a straightforward collaborative site. 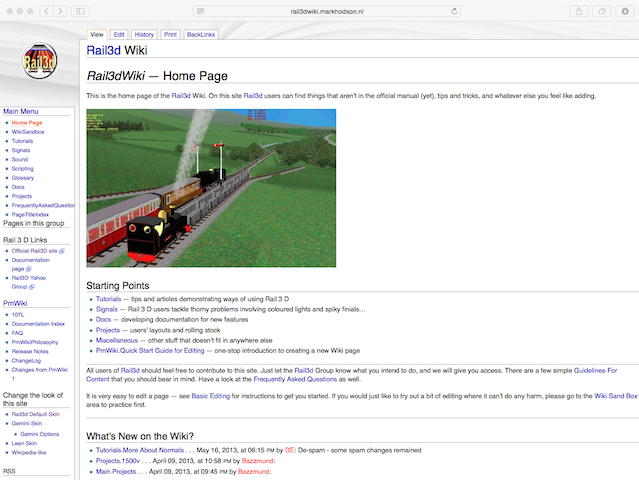 As well as giving me an excuse for tinkering, I hope the changes have brought some improvements for visitors. The search tool and improved navigation menus should make it easier to find your way around as the site gets steadily bigger, while the page layout should respect the idiosyncrasies of non-standard browsers better than the previous one, which looked awful in Internet Explorer on small screens. Comments are welcome, of course.