A British classic, patented by Andrew Ritchie in 1979 and still going strong.

While the Brompton is practically unbeatable for its folding ability, and is great fun to ride around town, it is not really the ideal bike for longish tours, with its very upright riding position and terrible aerodynamics. Still, it gave me the incentive to venture much further afield in my recreational cycling, and discover a great deal more of the Dutch countryside than what is within a day’s ride of where I live.

In 1996, after testing various machines from De Liggende Hollander, I decided to order a Challenge Wizard. This model, which they market as a touring/commuter machine, is still in production, although the detailed design has changed a bit - in particular, it’s now available with an aluminium frame, and has got considerably lighter.

The seat is a conventional metal shell with foam cushion, which I want to change to a more permeable material at some point, and I went for hydraulically-damped rear suspension, which is a delight, the Sachs 3 X 7 combination (with the then-fashionable gripshifts - aaargh!), and Magura hydraulic rim brakes.

The handlebars are arranged to tilt up and down freely (there is no weight on them, of course), so that they can be raised out of the way when boarding and alighting (you can’t use the word “mount” for a recumbent!) or pulled down to a more comfortable riding position. The seat angle is also adjustable.

Most people in the Netherlands who ride recumbents (called ligfietsen here) use them for commuting to work. Since I live so near to work that it’s as quick to walk (something no Dutch person will ever believe!) my mileage is rather lower than most, but in the first year I covered some 2000 km. Included in this were two “international” trips with luggage: south along the lf1 cycle route to Brugge (Bruges), and across the North Sea to Yorkshire.

The Wizard copes well with baggage. You can hang a pair of large panniers on the back wheel, and another pair either side of the seat, although the latter tend to get in the way of the horrid contraptions they put on British cycle paths to deter (motor)cyclists. Since the weight is low down and sprung, it doesn’t make the bike any more difficult to control, and you have the bonus that you can get at the seat bags without dismounting - handy if you want to eat something while riding, or look at the map.

Everyone asks “Yes, but how does it climb?” - I’ve always been a terrible climber, and here in Holland I don’t have much practice, so I’m probably not a good person to ask! Ny subjective experience has been that I can get up moderate slopes more easily than on an upright, allowing for the weight difference. On very steep slopes I find that I run out of balance before I run out of gears, so I get off and walk a little sooner than I would on an upright. Update - August 2003

Rather to my surprise, I’ve discovered that the Wizard is approaching its seventh birthday! After all that time, it’s still my favourite touring machine. If there’s a train journey involved I usually take the cmpct or the Brompton, and the Brompton also gets used a lot for short local hops, but for anything else I’m likely to use the Wizard. Of course, this may change a bit when I get the Trice Micro…

To summarise seven years of experience: the Wizard is a solid, well-designed tourer. It has few bad habits, it has so far given me little mechanical trouble, and it is a pleasure to ride, especially for long distances. Vices:

A third wheel makes you intrinsically stable, even at zero speed (well, mostly, anway - see the Flevotrike for an exception). Not having to think about balance and never having to unclip from the pedals at traffic lights make riding a trike that bit more relaxing. A well-designed trike can also be exceptionally stable at high speeds: you may have to crank uphill in a ridiculously low gear, but the downhill is so much pleasanter when you know you can do an emergency stop without ending up in the ditch. I currently run three trikes:

Fit a body shell to a trike, and you have something that protects the rider from the weather and improves the aerodynamics. A velomobile. Sounds great, and I’ve always wanted one (pedal cars for big boys — who wouldn’t want one?). But with my tiddly little commute to work (4.5 km, five lots of traffic lights), the weight and cost penalties of a velomobile outweigh the aerodynamic benefits. As for weather: if it’s raining in the morning, take the bus; if it’s raining in the evening, wear waterproofs. Still, it’s tempting: if I see a secondhand Alleweder sometime… 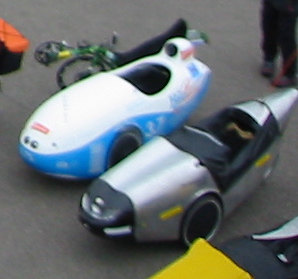 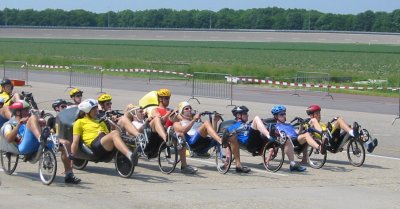